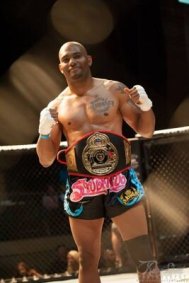 By: Albert Cameron – For all fight fans, we have this internal highlight reel that we call upon when we try and explain to the uninitiated (people who aren’t fans of the sport yet) what the appeal of the sport is. We tell them about the high-octane action, the level of skill, and some of the things that we’ve seen that defy logic and prognostication. For me, one of the Herculean tales that I recall is the first time I’ve ever seen Dann “the Bionic Fist of Justice” Cucuta fight.

Dann Cucuta had drawn Matt McWilliams at Gladiators of the Cage (GOTC) “North Shore’s Rise to Power 3.” Prior to this fight, Cucuta had only been in the cage once and he had picked up a win over Michael “The Boz” Bosiljevac. McWilliams was coming into the fight with a win over Gregory Clemens and a loss to Chris Matakas. During the Cucuta vs. McWilliams bout, Dann Cucuta had clearly proven himself to be the superior combatant. Despite his traditional Muay Thai apparel and cobra-like striking posture, Cucuta had proven that he was adept on the ground (using the cage wall as a spring board to obtain better position at times) at the same time as being dangerously heavy handed. Cucuta won the decision over Matt McWilliams and McWilliams has yet to fight another bout.

A good fight is a good fight; the icing on the cake is that Dann Cucuta was throwing heavy leather with one of the worst boxer’s breaks (a break in the metacarpus bones in the hand) that could possibly happen in competition. One of the nastiest breaks that could happen and the man didn’t flinch when he was throwing strikes. That, my friends, is the Bionic Fist of Justice at its finest. To celebrate Dann “The Bionic Fist of Justice” Cucuta’s impression on this guy, we’re going to count down Dann Cucuta’s Five Fastest Finishes (there is a reason I did this one in print and not on video) on this week’s Friday Five.

Note: Dann Cucuta is an accomplished Muay Thai specialist; we will be focusing on his MMA bouts and the fastest finishes therein.

NOTE: Pennsylvania Amateur rules state that amateur bouts, especially debuting amateur bouts have shorter rounds (typically 2 minutes); while this bout did go into the second round, the total time would have been three minutes and twenty-eight seconds.

I can admit ignorance when it’s becoming of me; when this fight happened, I had not been introduced to the deep Pittsburgh MMA culture yet and I am not in possession of the details of this fight as much as I’d like to be. I can delve what I do know: coming into his fight with Cucuta, Boz had been tested in big ways by some of Pittsburgh’s best; fights with Dino Juklo, Jeremy Sakuta, and a win over Derrick Bradley. I can also tell you that the Pennsylvania State Athletic Commission (PSAC) doesn’t just throw mismatches together; if Boz and the Bionic Fist of Justice were destined to collide, it was meant to happen. On a list of Dann Cucuta’s fastest finishes and to fight a man who would go on to finish over half of his fights in the first round, making it to the second round says something. A journey of a thousand miles begins with a single step, and Dann began his journey with a TKO victory over Mike Bosiljevac.

To date, Brandon “BLux” Lux may be the great hope to come out of Johnstown, PA, as far as MMA is concerned. I made that statement considering that both Blaie Belicki and Eli Garshnick (who was a roommate of UFC Fighter Chris Dempsey in their wrestling youth). Prior to Cucuta, Brandon Lux had been warming up to the Gladiators of the Cage (GOTC) Middleweight division, and it was only a matter of time before he’d have to come blow to blow with the reigning king of the Pittsburgh Amateur Middleweights: Dann Cucuta. The fight, fought at Stage AE in Pittsburgh’s North Shore, was slated to be a title fight; a strong test of competition and a great opportunity to get on the fast track to a successful pro career, for both. The fight started as you’d expect: striking to size each other up. The fight hit the ground and Cucuta proved that he was indeed a threat on all fronts. During the ground flurry, Lux turtled on Cucuta; Cucuta baited Lux into trying to explode out of the turtle position and caught him in a more advantageous position when he did. The fight ended with a tight head and arm triangle that still had plenty of room to get tighter if Brandon Lux didn’t tap out, which he did.

I remember being very excited when this fight had been announced. Prior to drawing Dann Cucuta, Davis Oracio, Jr. had a bout with Robert Corpora in Altoona, PA just four and a half months prior. Oracio disposed of Corpora in :27 seconds of round 1 and hardly was able to demonstrate what he is capable of. Surely, anyone who can dispatch of a light heavyweight (a rare find in the Keystone State) in :27 is worth his weight in salt. In his bout with Oracio, Dann Cucuta had changed up his primary game plan a little and allowed the fight to get to the ground. Cucuta found himself in rubber guard and then transitioned to an omoplata-like submission maneuver; while in that particular hold, Cucuta began punching the distressed arm of Oracio, Jr.; the fight ended with Dann Cucuta stretching out into an arm lock that finished the fight.

When Jeremy Sakuta’s career is over, I firmly believe that he will be identified as a man who backed down from no challenge. I have seen, with my own eyes, Sakuta’s displays of heart and commitment and I find myself with trouble finding the gumption to brew a pot of coffee in the morning, sometimes. There was a period in Pittsburgh fight history when it was difficult for Dann Cucuta to find a fight because of his killer instinct reputation; to compound the trouble with finding a willing opponent, PSAC had to approve the fight. Sakuta vs. Cucuta (I can still hear Drew singing Sakuta-Cucuta to the tune of Hakuna Matata in my head) was booked. In the fight, Dann Cucuta proved that his head movement was slick and superior, that his striking angles were to be feared, and that he could take a shot of his own. Sakuta stood as strong as he could, but at the end of the fight, the Bionic Fist of Justice was victorious.

It is inevitable: Dann “The Bionic Fist of Justice” was going to turn pro at some point in his career. Let it be understood: Dann Cucuta is a dangerous human being under amateur rules; when you allow a Muay Thai specialist to use his most dangerous weapons: the eight points of contact, dangerous becomes deadly. If anyone was going to have a shot against Cucuta and his new spectrum of weapons, it would have to either be someone who could out-strike Cucuta or someone who could keep him on the ground. Kyle Dunmeyer, a grappler from Ohio answered the challenge. In the opening exchange, Dunmeyer set out to take Cucuta down, as we’d expect. Cucuta, understanding that he had to kept range, deflected Dunmeyer’s shot and began executing pendulum-swing knee strikes. The one that stopped the fight was a knee aimed at the side of the head, that penetrated Dunmeyer’s blocking. In just :26 seconds of round number one, Dann “The Bionic Fist of Justice” had snapped the ball on his pro career.

Two-fifths of the finishes on this list are submissions, so Dann can’t be written off as a one trick pony. Through his career, he has demonstrated wisdom and expertise in his strikes and plan of attack. The next opportunity you get to see Dann Cucuta fight, I recommend you jump on it. We often hear people say “I left it all in the cage,” I’m hard pressed to find anyone who exemplifies that better than the Bionic Fist of Justice.

Until next time: Lights, Cameron, Action!