By: Albert Miller – If I never get the opportunity to tell you: I wrestled for a year in junior high. My record sucked, I wasn’t anything spectacular; for that season that I wrestled, I had some of the best self-esteem that someone named Albert could enjoy in high school, I also learned to appreciate the training benefits of being on a team. When Real Pro Wrestling (RPW) came out, I thought it was great. Sure, the name was a dig at sports entertainment, a shallow marketing attempt at drawing the support of jilted former competitors.

The concept was revolutionary, even before its time. Greco-Roman, Freestyle, Folk style, and other forms of amateur wrestling were on display on a televised format. The argument can be made that RPW was put on air when it was to capture the sensationalism that had been created by the UFC’s post-Ultimate Fighter 1 finale; a time when cable networks were climbing over each other, trying to get a piece of mixed martial arts. RPW had what any good competitive series needed: pageantry, substantial competitors, and a concept that made sense. Like any other “evolution” to combat sports, Real Pro Wrestling was trying to force an evolution when there was no need for one. RPW only lasted two seasons; had it been unveiled in the day and age where grappling is much more saturated in the public athletic conscious and when the Eddie Bravo Invitational is on UFC fight pass, Real Pro Wrestling may have had a better go than it did.

This week on the Friday 5ive, we’re counting down five mixed martial artists who were involved in the only televised wrestling promotion that wasn’t predetermined in existence.

Note: These were four that I could find. If you know of any more, please get in touch with me, I’d be very eager to know about them.

No. 5: Rulon Gardner – Yes, this one is a tremendous stretch, and that’s why it’s number five. Rulon Gardner cemented his place in the hallowed halls of wrestling Valhalla by defeating Alexander Karelin in the 2000 Olympic Games, winning the gold medal. Rulon Gardner, an American Olympic hero, was only a face for Real Pro Wrestling; an ambassador, if you will. For RPW to make it’s foothold, as much of one as they did, they needed someone like Rulon Gardner to be associated. Sure, there were other Olympic medalists to consider: Kurt Angle (who was a WWE wrestler at the time), Matt “the Law” Lindland (who was contracted to the UFC, then the IFL), or even Kevin Jackson; at the time, Rulon Gardner was the most recent US Olympic wrestling medalist and his association was much more prime than the others listed. Of course, as a mixed martial artist, Rulon Gardner was a PRIDE FC veteran, having a bout with fellow Olympic medalist, Hidehiko Yoshida. 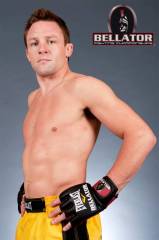 No. 4: Joe Warren – Former Bellator MMA bantamweight champion and Jackson-Wink MMA student Joe Warren was also a wrestler for RPW. As far as wrestling credentials go, Warren won the 2006 Pan-Am and World Championships; in 2007, he won the World Cup. RPW, like most collegiate wrestling outlets, had teams; Warren was teammates with “King Mo” Lawal and Daniel “DC” Cormier on the Oklahoma Slam team. It’s not surprising in the least that a Bellator champion had such wrestling credentials. Royce Gracie might have been the first modern MMA tournament champion, but who was the first heavyweight champion? Mark Coleman, a highly decorated wrestler. Joe Warren is built from the same granite as the wrestler legacy in MMA; a legacy that includes Dan “The Beast” Severn, Mark “the Hammer” Coleman, Kevin “The Monster” Randleman, Sean Sherk, and Matt Hughes. When Joe Warren won the Bellator MMA bantamweight championship, and held it as long as he did, he inducted himself into that lineage. Joe Warren is another pillar than MMA wrestlers are building their legacy on. 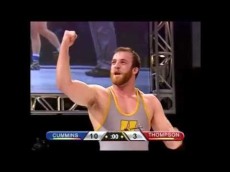 No. 3: Patrick Cummins – I struggled with ranking Patrick Cummins higher than Joe Warren. Joe Warren was an MMA champion, but Cummins was an RPW champion; being that the focus is RPW, I had to go with Cummins. As a State College resident, there are quite a few times when I really don’t like living here. The pedestrian traffic is awful, the locals hate the transient population, and good luck getting anywhere on Football weekend. When Patrick Cummins was challenging for the RPW Heavyweight championship, RPW did a piece on Cummins and where he was from. That vignette did give me a little bit of pride in Happy Valley (and heaven knows we can use all the pride we can get). Cummins, a graduate of Penn State University, was a central Pennsylvania wrestler that the RPW audience could get behind. In RPW, the only Pennsylvania team was the Hammer and Cummins won the heavyweight champion (teammate Sammie Henson was also a champion for the Pennsylvania Hammer). After Real Pro Wrestling, Cummins made his way to Strikeforce and ultimately the UFC.

No. 2: Muhammed “King Mo” Lawal – the martial artist known as “King Mo” is quite possibly one of the most successful MMA fighters to never step foot into the UFC Octagon. Muhammed Lawal is the former Strikeforce light heavyweight champion, Bellator MMA veteran, M-1 Global veteran, World Victory Road veteran, and Rizin FF veteran. Along the way to becoming one of the most recognizable names in the light heavyweight division, he has conquered every challenge besides the UFC. Before King Mo was an MMA force to be reckoned with, he was an amateur wrestling standout. In high  school, Mo was a state champion. In college, he was a division two finalist. By the time his Oklahoma University collegiate career was over, he was a Big 12 conference champion and Division 1 All-American. Season 1 of Real Pro Wrestling had two teams that won multiple championships; the Pennsylvania Hammer had Patrick Cummins and Sammie Henson as champions; the Oklahoma Slam had Daniel “DC” Cormier and Muhammed Lawal. Of course, after Real Pro Wrestling had folded, King Mo would go on to the world of professional Mixed Martial Arts and Professional Wrestling. King Mo recently won the Rizin FF heavyweight grand prix and lost his latest Bellator outing to fellow wrestler “Mr. Wonderful” Phil Davis. 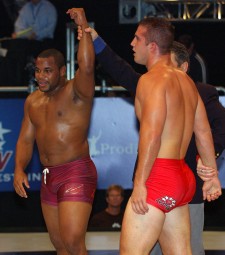 No. 1: Daniel “DC” Cormier – Would you have guessed in 2004 that the 211 lb. wrestling champion for the Oklahoma Slam would go on to win titles in King of the Cage, Strikeforce (grand prix champion), and the Ultimate Fighting Championship? Cormier’s amateur wrestling background is tremendous: state championships in high school, collegiate accolades. Cormier was offered a scholarship to LSU, but declined to pursue a career in wrestling. In the 2004 Olympic games, Cormier would come in fourth in the tournament. In the 2008 games in Beijing, Cormier would be announced wrestling team captain, but was unable to compete due to kidney failure brought on by extreme dehydration weight cutting. Between the 2004 and 2008 games, Daniel Cormier was the 211 lb weight class competitor for RPW’s Oklahoma Slam (teammates with King Mo Lawal) and even won the first and only championship for the team. After RPW, Cormier began his journey of Mixed Martial Arts, eventually winning the UFC Light Heavyweight championship. With his victories, both on the mat and in the cage, Cormier inducted himself into a pantheon of competitors that excelled at the oldest Olympic sport and the hybrid combat known as MMA.

I had a conversation with a man who was very involved in amateur wrestling, and I was trying to reconcile his endearment to amateur wrestling to my views on MMA. As the conversation went on, that gentlemen conceded that he was glad that MMA was becoming as big as it was, that it seemed to be giving wrestlers somewhere else to compete after their college careers are over. That made me happy to hear that.

I loved RPW and even today I still miss it. I hope this week’s Friday 5ive brought back some good memories. If you’re new to RPW, check it out on YouTube, there are some very good wrestling matches to be seen.