By: Albert Miller – One of the things I quietly hoped for with the announcement of WMG-IMG purchasing the UFC was that the Gladiator intro with “Face the Pain” by Stemm would be buried in a vault of paperwork so deep that Indiana Jones couldn’t find it. With this year being the crap salad with extra pickles that it’s been, I’ve been trying to find the positives in most things. Yes, “Face the Pain” is to music as blunt force trauma is to testicles, but there have been much worse showings for MMA promotions in recent years. To celebrate my search for zen, I’ve decided to compound that ill will with more ill will. On this week’s Friday 5ive: five of the worst marketing efforts in MMA.

Note: These are five of my choices and are in no way definitive. 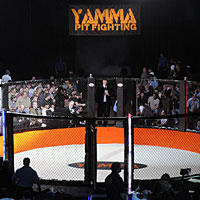 No. 5: Yamma Pit Fighting – I never thought I’d write a Friday 5ive about things that are awful and Yamma Pit Fighting wouldn’t be at the number one spot; but hey, 2016 has sucked for everyone. In case I haven’t ranted enough, here’s a little history: the guy who started and subsequently sold the UFC saw how well his former financial burden was doing and thought that he could capture lightning in a bottle twice. His brainchild, Yamma Pit Fighting, was surely going to do just that.In short: it didn’t. The problem that Yamma had getting off of the ground was that it was trying to exist in a unique period of time where MMA brands needed cable distribution to make their mark. The IFL was signed, sight unseen, even Bodog got a little traction because of cable. Bob Meyrowitz was successful at pay per view back when pay per view was king; with so many new sources for MMA becoming available, to compete, you had to be on cable. Meyrowitz was also relying on an esoteric approach to MMA, using a traditionally foreign branding in an era when American MMA was climbing to the top. The last nail in the antiquated pay per view approach was that subscribers would get a t-shirt that said “I survived Yamma Pit Fighting.” When it came time for the fights, the whole premise of the pit (preventing stalls) completely fell flat on its face, the single round fights were lacklaster, and Bob Meyrowitz remembered that he wasn’t that good at promoting fights in a new day using old ways. There was no Yamma Pit Fighting 2.

No. 4: The IFL Rap (International Fight League) – Ever seen a video so awkward that it made your reproductive organs hurt? I loved the International Fight League and I would often defend the IFL to the haters, but when the IFL rap came out, there is only so much that you can say before you just end up looking silly yourself. Perhaps its all the time that I’ve spent actually learning how to play an instrument, or those hours I’ve spent learning music theory, but if you’re going to produce a rap song to promote your brand you should actually use rappers. Of the vocal talent that had appeared on the track, we had: Matt “The Law” Lindland, “The Croatian Sensation” Pat Miletich, and Renzo Gracie; all of which are not rappers, when you listen to the song, I’m sure you’ll agree. I need to be fair to Renzo (and preface that I am not an expert on rap music by any weight or measure), his parts didn’t sound terrible. It could have been that he actually had some chops, but it is most likely because the others were just awful and even the “okay” looking girl is a ten in a room full of twos. When you think of good marketing efforts, you have to answer the simple question: did it make me want to watch a fight? The answer is: no. I watched the IFL because I loved the concept and they had earned my loyalty. That rap song did nothing to improve my interest in the brand.

No. 3: BodogFIGHT – Do you remember BodogFIGHT? Bodog came out just in time to capitalize on the boom that had been ignited by Griffin vs. Bonnar on the Ultimate Fighter finale. Bodog even had “The Last Emporer” Fedor Emelianenko on their “Clash of Nations” event. Their regular programming was on free TV; how does a fight promotion, that could land Fedor Emelianenko and on free tv, could bomb in my opinion so bad? Because it was an infomercial for online poker that happened to have fights on it. We can argue about it all day, but there is really no explaining how five minutes of fighting justifies twenty minutes of watching the Bodog owner play volleyball on the beach with models. The fights were okay; I’m a fan of any platform where up and coming fighters are able to cut their teeth on television. Actually, I’m a big fan of any television platform that allows for MMA. When MMA is on TV, it’s greater exposure and the more widely accepted that my favorite sport becomes; it’s a great opportunity for everyone involved. BodogFIGHT really fizzled out after a year or two; it seemed like Calvin Ayre (the owner of Bodog) might have been drinking the Gary Shaw Kool-Aid (that the smaller MMA promotions could band together and take their piece of the pie away from the UFC, before the pie was even done baking), as he tried to partner with other promotions to get his brand noticed. I’m not knocking BodogFIGHT as a promotion; my problem with the whole deal is that it was marketing tool. Bodog had about as much interest in being in the fight business as I do trying to pull my own eyelids off.

No. 2: WFA: Where Night Club Meets Fight Club – Fight Club was a novel that was an on-the-money social commentary about how people become so married to their work just so that they can buy material things that are unnecessary. The concept of the Fight Club was an avenue that men could take to separate themselves from the consumer driven lifestyle. A night club is where people go to socialize with people, imbibe alcohol, and have a good time. If you think about it, long and hard, you realize that those two concepts are on the immediate opposite sides of the human condition spectrum. Enter: the World Fighting Alliance (WFA). The idea of “Fight Club” was extremely popular in the late nineties and through most of the first decade of the new millennium, that the modern male was so intuned with his own masculinity that only a physical confrontation could transmorph his weak shell into a new existence. So, it would only make sense that MMA promotions would have gobbled this up (and truthfully, it would have been silly for them not to). I’ve been to quite a few fights and have enjoyed myself regularly. I can’t say that I’ve ever looked around at the cage and the banners and said: “You know what would make this better? Techno music, girls dancing in go-go cages, and strobe lights.” I’m sure “Handsome” Jim Aujay, Allen Levine, Jim Frazier, and Rob Lynn can all agree. That’s exactly what the WFA had, and this was early 2000’s, so the video quality on tapes and replays couldn’t remotely do the abomination any justice. The WFA’s only saving grace was that the fights weren’t bad. “Razor” Rob McCullough, Kimo Leopoldo, Rich Franklin, among others did fight on the cards. The WFA, possibly attributed to the piss poor gimmicks that it promoted with, only lasted four events; three of which were under the “Fight Club Meets Night Club” gimmick. The last one, “King of the Streets,” featured Bas Rutten coming out of retirement, Matt Lindland, and Quinton “Rampage” Jackson in competition.

No. 1: IFL: Someone Leaves on a Stretcher – I’ve said it once in this article, I’ll say it again: I loved the IFL and completely supported most of their causes. In late 2006, the sports world was still reeling from the impact that Griffin vs. Bonnar had on televised prize fighting. Television networks were picking up MMA, essentially sight-unseen. During this crucial time, MMA fans were trying to get bans on MMA lifted across the Union. When trying to change legislation, especially laws put into place to preserve the physical well being of your fellow man, you have to hold your breath that the unthinkable doesn’t happen. When trying to change the minds of the heads of state, all of your t’s must be crossed, i’s dotted, and your penmanship must be perfect. The IFL already had a cable deal at the time and then had signed on for a new one. On the first episode of the new IFL show, the commercial said, and I quote: “Someone leaves on a stretcher.” …followed by ambulance sound effects. The only way to top that, in a “how can we ruin MMA’s reputation” contest, would be to strap scissors to the UFC’s gloves. I have groaned audibly before, but I can’t think it was ever so loud. Fans, who shared my opinion and stance, all over the internet completely lost their minds on the ordeal. The IFL quickly recanted their marketing attempt, and apologized. The problem with that snafu was that it was exactly what legislators needed to arm their defense against allowing MMA to be contested. Surely, one commercial couldn’t have such serious implications, right? You’re damn skippy it could. The IFL quickly apologized and pulled the commercials, but the damage had been done (in the short term). The IFL only lasted two seasons, and then ceased operations; but those two seasons were magic.

Thanks for joining us for the Friday 5ive! Make sure you stick around CageNationTV.Com and check out the Prizefight Podcast!