By: Albert Miller – Picture it: Houtzdale, PA, 1995. For a young fan of Jean Claude Van Damme and other martial arts movies, a television show comes along that will both satiate his love of combat sports and comic book style visuals. That show was the WMAC Masters, and it was great!

There was a lot going for traditional martial arts back in the mid-1990’s: the Karate Fighter toy line was a hot seller, Van Damme was at his peak of movies, Mortal Kombat and Street Fighter II were thee home console games to own, and the movie “Three Ninjas” had little kids trying to do all kinds of home grown martial arts at home. I think it’s safe to assume that children in the 1990’s were extremely impressionable; in fact, I believe that my generation is responsible for half (if not all) of the common sense warning labels that you see on things today.

So what was the WMAC Masters? Most simply, it was a show that showcased the honor and tradition of martial arts, competitions were held weekly, and there were colorful costumes and fun visuals. To celebrate this week’s dizzying dose of nostalgia, I’m counting down five of the most memorable aspects of the WMAC Masters.

Note: This list is not definitive or should be interpreted as being from an authority.

No. 5: The Concept of the WMAC – The WMAC, or “World’s Martial Arts Council” was a fictional sanctioning body just for the show. According to the show, which had its own martial arts analysts (the jury is still out if they were actual martial arts experts or not), and those analysts would convey rules and rulings laid down by the WMAC. The WMAC Masters program was crafted to answer the age old question “which martial art is best?” By 1995, the UFC was already a few events in, but it was hard for kids to my age to keep up with the UFC. At this stage of my development, I was more enamored with the pageantry of martial arts and the display, than I was to see anyone get knocked out cold. According to the show, the WMAC was undertaking the task of trying to figure out which show was best; they would round up experts in a host of different martial arts styles and they would pit them against each other in contests and combat to award decoration. Ultimately, each of the masters were competing for the Dragon Star Belt (think UFC Tournament Championship …but for kids). I made an observation a while ago about how martial arts movies from the late 1980’s and the early 1990’s had really predicted how we’d feel about the martial arts now. In the movie Kickboxer, being a Kickboxing champion was a big ordeal; now we have Glory & Dutch rules kickboxing competitions in the main stream United States. In Kickboxer II, there was an archetypal business man looking to make a ton of money in Kickboxing promotion. The WMAC was an umbrella for fighters to compete under, not unlike the Rizin Fighting Federation. For the WMAC Masters, I think I really enjoyed the romantic notion that there was an entity that was setting out to answer the ultimate martial arts question: who was the best?

No. 4: Explanations of the Martial Arts – I come from a simple town that had their simple pleasures, like bonfires and high school football. When you’re one of the only people in a town that can recognize that Korean Tang Soo Do is different from the blanket “Karate” (with the exception of the kids who studied, which I did not), you start thirsting for knowledge of the combat sports. When the WMAC would sanction a fight between Hien “Tsunami” Nguyen and Richard “Yin Yang Man” Branden (actual names and nicknames, by the way), you’d get a little history on Nguyen and Tae Kwon Do, and then you’d get information on Branden and his particular style of Wushu, it had completely changed the game. Remember last week when I talked about the urban legends of martial arts? Remember the one about having to register your hands as weapons? That’s the area I grew up in; every martial art in a gi was karate, period. For a show to come along that would inform me about such disciplines as Tae Kwon Do, Hapkido, Kenpo, and Kung Fu, it completely changed the game for me. The only way to defeat ignorance is the embrace knowledge, and that’s how I learned that there were more styles than just Karate, and ultimately lead to my embracing the world of martial arts and mixed martial arts in total.

No. 3: The “Mixed Fight” Concept – Why do we get together every week? Why do we record the podcasts and write the articles, and go to fights? Because we love Mixed Martial Arts! MMA stemmed from an idea, from bold thinking that dared to ask “are we ready to find out which martial art is the best?” The Ultimate Fighting Championship (UFC) wasn’t the first mixed fight event in the world; Antonio Inoki and Muhammad Ali threw down long before that to try and settle the argument. How many movies were made and how many deep conversations didn’t we get into with our buddies about which martial art was the best? Curiosity was the exact catalyst that set the martial arts world on fire and MMA was born. The UFC began promoting in 1993, and WMAC Masters didn’t air until 1995; but what is important was that the combination of the two was allowing multiple age groups to ponder the same question. For kids in the 1990’s, this Saturday morning gem was a great way to become informed on the discussion and to critically think about why one martial art may be superior to the other. Sure, the competitions were scripted, but it was fun. Like professional wrestling, you have a good idea about who’s going to win, but you are entertained. Not only entertained, but pretty informed as well. It is also pertinent to note that during the battles between the martial artists, they did wear MMA style gloves. Foreshadowing the future to come? Probably not, but it’s fun to imagine.

No. 2: The Story Lines – As a child (and as an adult), I had the attention span of fifteen consecutive minutes. If something was going to capture my attention, it had better be pretty damn special, because I had messes to make and I had zero intention of ever cleaning them up. So far, I’ve covered how much I’ve enjoyed the martial arts parts of WMAC Masters, but the other side of the coin is the stories that played out! The first season of the show introduced the fighters to everyone, fleshed out reasons why that we should be interested in them winning or not; pretty much all of the reasons why people watch professional wrestling, except that we knew we were watching a television show. The show had drama, action, education, and a lot of fun. Season two actually had a great story arc about the championship belt being stolen and men of honor were turning into despicable human beings. As entertaining as it was, the show was geared towards young human development, there was a lesson to learned about how your character was important to how you’d grow into an adult. That’s a pretty heavy lesson to learn, that someone could be so skilled as a warrior an still turn to dishonor in the sake of greed. In the later episodes of Season 2, it was found out that Tsunami and Tracer (again, actual nicknames) had stolen the Dragon Star and the WMAC would suspend all competitions until it was recovered. The real pain in the taint about that is the show was cancelled after season 2, and we’ll never know if the belt had come back at all. We can dream; it was a kids show and in kids shows, the bad guys always get their comeuppance. 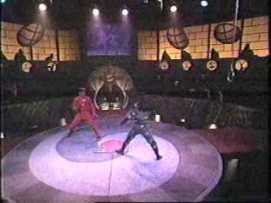 No. 1: The Actual Martial Artists – How easy wouldn’t it have been for the producers of WMAC Masters to just put some good looking actor into these roles? They could have, easily. Saturday morning television in the 1990’s was a healthy mix of funny, family, and then later in the morning was a little edgier. With shows like the Mighty Morphin’ Power Rangers, VR Troopers, and Superhuman Samurai Syber Squad, it actually would have been the smart money to hire good looking actors and use stunt men. But no, damnit, the show was called WMAC Masters, the MA meaning martial arts, and they were going to use Martial Artists! I can’t tell you that I appreciated the actual martial artists at the time, but as someone who follows combat sports now, I surely appreciate them in my maturity. The cast included:

If my opinion counts for anything (and it might not, the dangers of an opinion), the Martial Artists are what gave that show its special shine and validity. A lot of the base knowledge I have of traditional martial arts comes from that show and for that I am grateful.

Thank you for joining us for the Friday 5ive; I’ve sure enjoyed this stroll down memory lane.